If this coin doesn't grab your attention it may be time for an eye exam.  This is an 1884-O Morgan Dollar struck 20% off center.  Twenty percent is an unusually large offset magnitude for Morgan Dollars.  Obverse and reverse were both die struck and the offset direction fortunately results in a visible date and mint mark.  It has been certified and encapsulated by Numismatic Guaranty Corporation (NGC), graded MINT ERROR MS 61, NGC Certification Number 3462379-003.  See more photos and a detailed description at: eBay item 291673606077 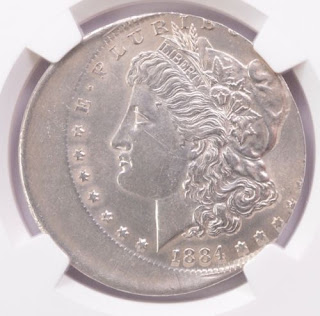 photo credit: eBay sullivannumismatics
Posted by admin at 20:20 No comments: Links to this post

Consider the metal composition of United States cents.  Non-collectors may assume that all cents are 100% copper but that was only true from 1793-1837.  Since then the United States Mint modified the recipe several times.  The official Mint website gives a brief chronology of metal composition changes.  One change occurred in 1962 when a bit of tin was eliminated, resulting in a 95% copper / 5% zinc alloy.  Which brings us to the coin pictured below.  It is dated 1962-D so presumably it was minted in 1962 at the Denver Mint.  The twist is that instead of striking a 95% copper / 5% zinc one cent planchet, they struck a 90% silver / 10% copper ten cent planchet.  This produced a wonderful precious metal error commonly described as 'wrong planchet' and/or 'off metal'.  The dime planchet has a smaller diameter and thickness than the one cent planchet, so the die strike was unlikely to transfer 100% of the design to the planchet.  Indeed we can see the incomplete peripheral design elements such as the obverse IN GOD WE TRUST motto.  The raised design elements on both sides are remarkably complete despite the thin planchet.  Read more about this rare piece at: eBay item 201089202000.

photo credit: ebay ccrc2010
Posted by admin at 18:10 No comments: Links to this post