Today we consider a dramatic starburst broadstruck off center Jefferson Nickel.  One day in 1968 at the United States San Francisco Mint, probably a Monday, a coin press collar either broke or was out of position while a 50 ton hammer die was rapidly striking planchets.  The collar’s job is to dimensionally control the ‘third side’ of the coin by preventing radial expansion beyond the upper specification limit (defined by the US Mint for the 5-cent piece as 21.21 mm nominal diameter with tolerance currently unpublished.)  Planchet material reacts to a strike by following the path of least resistance, ideally flowing to the 3D shape set by a properly positioned hammer die, anvil die and collar.  In this particular case, the broken/mispositioned collar allowed the planchet to sit off center in the striking chamber, then bam, the hammer die struck and planchet material flowed to an oversize irregular diameter of 24.50 mm, starving some raised design features and distorting others.  Most of the legend lettering is stretched out but fortunately the date and mint mark remain sharp and readable, answering two important questions for future observers -- when and where did that happen? 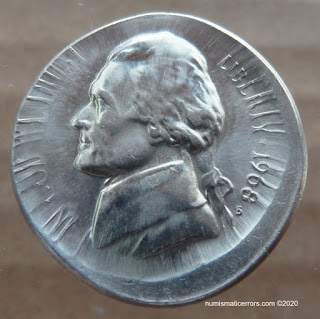 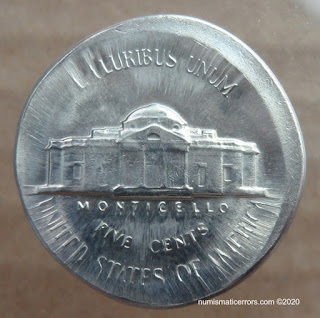