There's an old saying that when things go wrong they go wrong in bunches.  Exhibit (a) is the multiple error coin pictured below.  Both sides were struck off center because the planchet was not coaxially aligned with the striking dies.  The obverse (heads) side was struck by the proper obverse die but the reverse die was capped by a previously struck coin, so an incuse mirror image obverse design was struck on the reverse (tails) side of this coin.  Good luck finding that in the manufacturing work instructions!  In laymen's terms this is a two-headed coin while in numismatic terms it's a brockage strike.

Coin dies have service lives measured in hundreds of thousands of strikes because dies are hardened steel and planchet alloys are softer.  A Jefferson Nickel die cap is too soft to strike planchets of the same material (copper nickel alloy) because both deform at the same rate, producing a short run of brockage coins that rapidly degrade from early stage mirror images to late stage 'uniface' blobs bearing no resemblance to the original design.  The small distinct initials "FS" (designer Felix Schlag) and other features visible in the photos below indicate that this is an early stage brockage.  If you want a detailed brockage, go early or go home!  See this eBay item 162395383455. 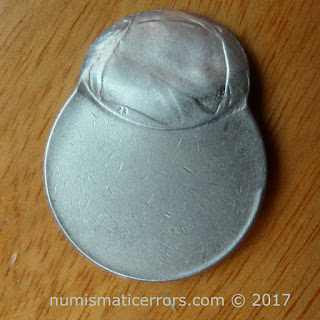 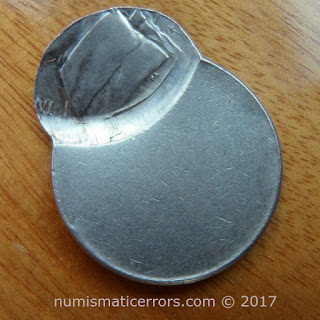